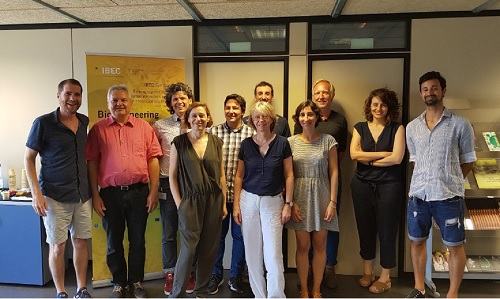 The Kick-Off meeting of the EU project BRIGHTER (Bioprinting by light sheet lithography: engineering complex tissues with high resolution at high speed), an initiative led by Dr Elena Martinez from the Institute for Bioengineering of Catalonia in Barcelona (IBEC), took place this week in Barcelona.

The event has brought together all the partners of the project, who have taken the opportunity to introduce themselves and explain their roles and responsibilities. The consortium members also presented the main production and research lines of the project and defined the work plan for the following months.

Among the beneficiaries of BRIGHTER we can find the Institute for Bioengineering of Catalonia (IBEC), that covers most bioengineering fields, from basic research to medical applications; the Buchmann Institute for Molecular Life Sciences (BMLS) of the Goethe University Frankfurt (GUF), which is focused on understanding the molecular mechanisms underlying cellular functions; the Technion–Israel Institute of Technology, which is the Israel’s primary technological university; and the companies Mycronic and Cellendes, from Sweden and Germany, respectively.

All the partners of BRIGHTER will work together until 2022 to make our lives easier. The researchers involved in this pioneering project aim to importantly assist, for example, those on the waiting list for a donor organ by developing the first 3D bioprinting system able to produce functional organs.

It is true that, in recent years, the number of donors has increased substantially, but lots keep dying every year while they wait for a kidney transplant or other kind of transplant. Given this scenario, find other ways to give someone a ‘second chance on life’ is fundamental, and BRIGHTER may have the key to all of this. Concretely, in the next three years the scientists will be focused on produce artificial organs by using 3D printers containing living cells with the purpose of compensate for the lack of organ donations and replace animal experiments.

For this, they will develop a top-down lithography method that will enable the researchers adjust the spatial structure and the stiffness with an unprecedented resolution to create the same heterogeneous microstructures that cells find in natural tissues.

This project has received funding from the European Union’s Horizon 2020 research and innovation programme under No. 828931